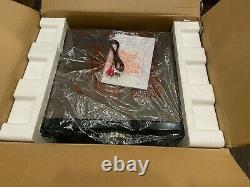 The Victrola Empire 6-in-1 Bluetooth Record Player is perfect for vinyl lovers with its 3-Speed Turntable and Mid-century modern look. Stream your music via Bluetooth, or play your favorite tunes on the FM Radio, from the CD Player, or through the 3.5mm Auxiliary input! Features an analog radio dial with beautiful "around the dial" LED lighting and gold accents.

This item can be shipped to United States.